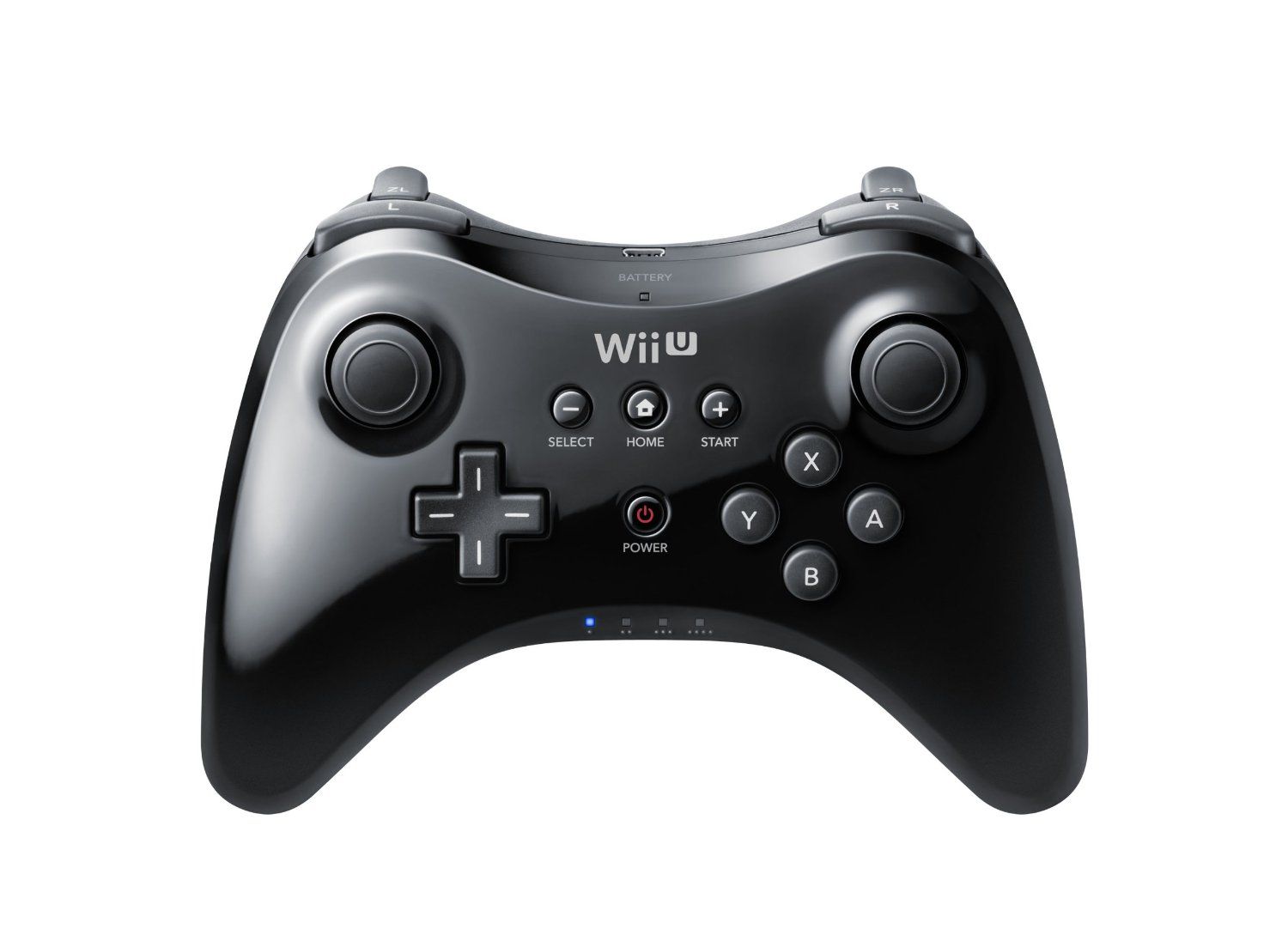 Control thy passions lest they take vengeance upon thee.

Microsoft has not made any major changes to DirectInput since DirectX 8, and later introduced XInput in DirectX 9 as a new Input API. Let us compare the two APIs.

In conclusion one could say that XInput provides an easy and yet still powerful API to access X-Box like controllers, while DirectInput is a very powerful and versatile API for any imaginable controller out there, but its versatility comes with a huge cost: it is a lot more tedious to implement.

XInput is a cross-platform API that works on the Xbox 360 as well as on versions of Windows, including Windows XP, Windows Vista, Windows 7, Windows 8 and Windows 10. On the Xbox 360, XInput ships as a static library that is compiled into the main game executable. On Windows, XInput is provided as a DLL that is installed into the system folders of the operating system.

There are currently three versions of the XInput DLL as of today. The choice depends on the desired functionality of XInput:

XInput 1.4 ships as a system component in Windows 8 as XINPUT1_4.DLL. It is always available and does not require redistribution with an application. The Windows Software Development Kit (SDK) contains the header and import library for statically linking against XINPUT1_4.DLL.

XInput 1.4 has these primary advantages over other versions of XInput:

You can use XInput 1.3 for applications that support down-level versions of Windows and require functionality not provided by XInput 9.1.0 (that is, correct subtype reporting, audio support, explicit battery reporting support, and so on).

Like XInput 1.4, XInput 9.1.0 ships today as a system component in Windows 8, Windows 7, and Windows Vista as XINPUT9_1_0.DLL. It is maintained primarily for backward compatibility with existing applications. It has a reduced function set so we recommend that you use XInput 1.4 on Windows 8. But it is convenient to use for applications that must run on down-level versions of Windows but don't need the additional functionality provided by XInput 1.4 or XInput 1.3.

So much for the theory, let us add XInput support to our games!

To use XInput in a project, xinput.h has to be included and the project must link against the XInput.lib:

Getting the State of a Gamepad

Remember how much initialization we had to do for DirectInput in the previous tutorial? Well, how is how to get the state of a gamepad in XInput, right out of the box:

We only need one function call to the XInputGetState method:

This parameter specifies the player ID, i.e. player 1 to 4 (0 to 3 in C++). Those are indicated by the little dots on the bottom of the controller.

This is a pointer to an XINPUT_STATE structure that receives the current state of the controller.

So what information does the XINPUT_STATE structure hold for us:

This value indicatesa whether the state of the gamepad was changed. If the dwPacketNumber member is the same in sequentially returned XINPUT_STATE structures, the controller state has not changed.

This structure contains the current state of an Xbox 360 - like Controller. Let us have a closer look at it:

Now, as you can see, this structure holds all the information we need to work with a gamepad.

This is a bitmask of the device digital buttons. A set bit indicates that the corresponding button is pressed. Here is a list of all gamepad buttons:

To test whether a button is currently pressed, all we have to do is a logical and:

Obviously, as with the keyboard and the joystick, we store the state of the gamepad during the previous and the current frame to be able to detect buttons that are still pressed or have just been released:

I never really wanted to work with XInput, but this is definitely to easy to use to ignore any longer.

Those members speciify how hard the left and right trigger analog buttons have been pressed. The values are between 0 and 255.

Here is an example of how to get the normalized values for the left trigger:

Recall what we talked about in the previous tutorial: As analog devices have a wide range of values, it is quite common to have spurious input. Imagine a thumb stick being left alone, sitting in neutral position, theoretically now both values should be 0, but usually they are just some small values close to zero, but not actually 0.

Because of this, if the raw input of an analog device was just applied directly to the movement of a character, the character would never stay still. To eliminate this problem, one can define a dead zone, which is an area around the center of the game controller input range that is ignored:

An easy approach to solve this problem would be to simply set the x and y-values to zero if they are close to zero, but that doesn't really work well for the following two reasons:

The first problem can easily be solved by using a vector and its lenght. If the input from the joystick, as a vector, is smaller than the dead zone vector, then we do nothing.

Here is a quick and dirty vector structure to tacke the problem:

Notice that we do not need the actual length of the vector to check whether it is in the deadzone or not, the square length is enough for that information, but the length is needed to normalize the vector:

To solve the second problem, one can simply compute the percentage between the dead zone and the maximum possible axis range and then normalize the input and multiply it by the just computed percentage. Let $l$ be the length of the vector in question, i.e. the current position of a thumb stick, $dz$ the deadzone and $m$ the maximal value, then we compute the percentage $p$ of the vector between the deadzone and the maximal value as follows:

To get the normalized position of the thumb stick $(nX, nY)$, we simply normalize the vector $(x,y)$ and multiply by the just calculated percentage $p$:

Here is an example of the above theoretical discussion:

And that's it already. XInput is almost too easy to be true!

As a neat little addition, XInput also allows us to easily query for the battery level of the gamepad via the XInputGetBatteryInformation method:

As before, this is the player id.

If the function call succeeds, this is a pointer to an XINPUT_BATTERY_INFORMATION structure:

The type of the battery:

The battery level of the device. It can be one of the following four values:

Adding the Gamepad to the existing framework

To make the new gamepad class play nicely within the actually existing keyboard / mouse and DirectInput / Joystick framework, we map add a value of $293$ to each gamepad button. Now querying for the gamepad can safely be done alongside querying the keygboard and joystick states:

X-Box like controllers come with two force feedback motors, a left and a right one. To set the force applied to those motors, we can use the XInputSetState method:

Once again this DWORD specifies the player id.

A pointer to a vibration structur:

The two WORDs of this structure simply specify how much force is applied to the left and the right force feedback motor respectively. Valid values are in the range $0$ to $65535$. Zero signifies no motor use while $65535$ signifies $100$ percent force feedback power!

Here is an example of how to use this structure with normalized coordinates:

As a little demo, I added an icon for the gamepad battery level on the HUD. The main game scene now displays the position of the two thumbsticks. In addition, there are a few force feedback effects in place, when the game starts and during the main game scene, depending on the thumb stick positions. 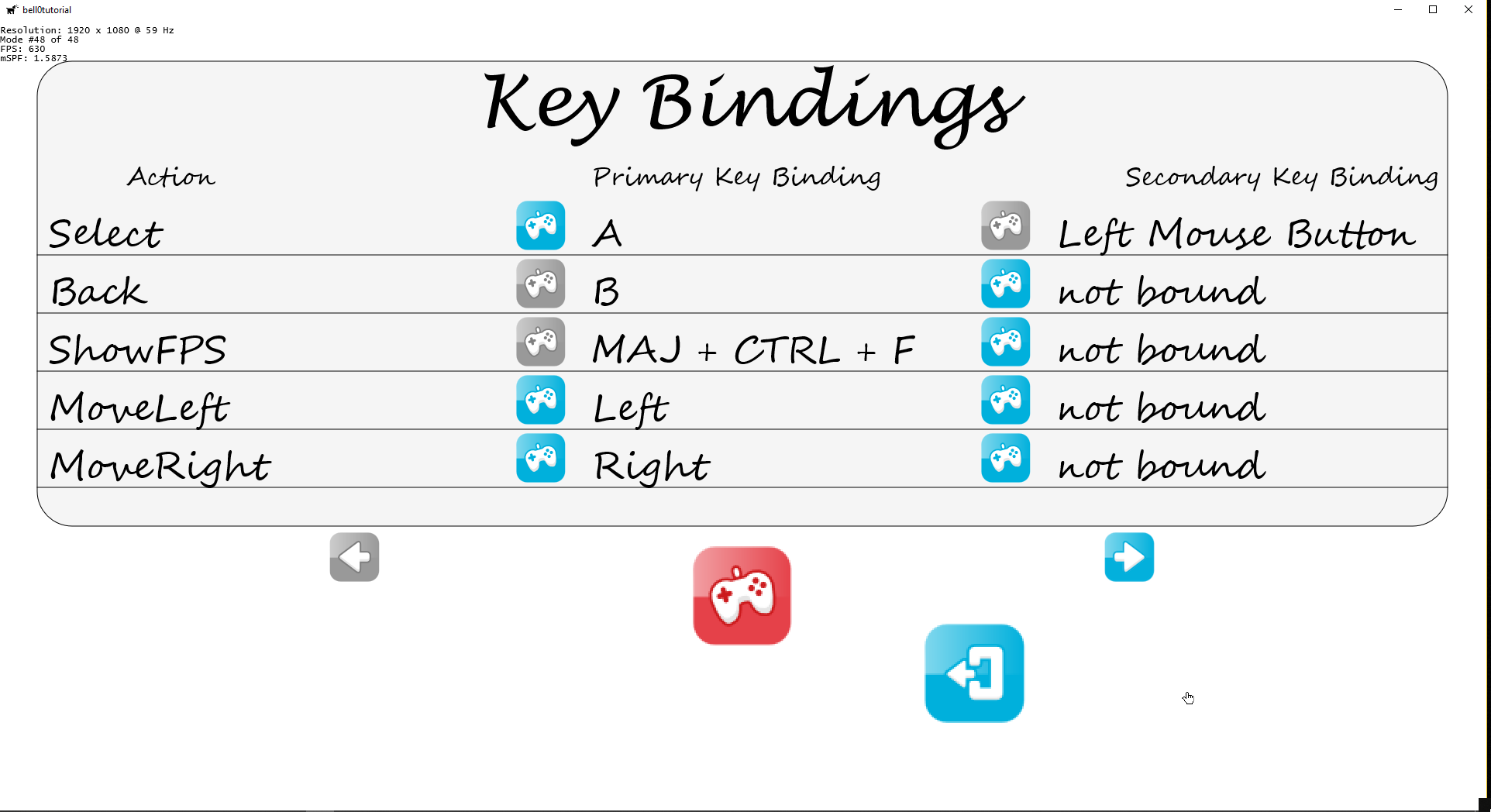 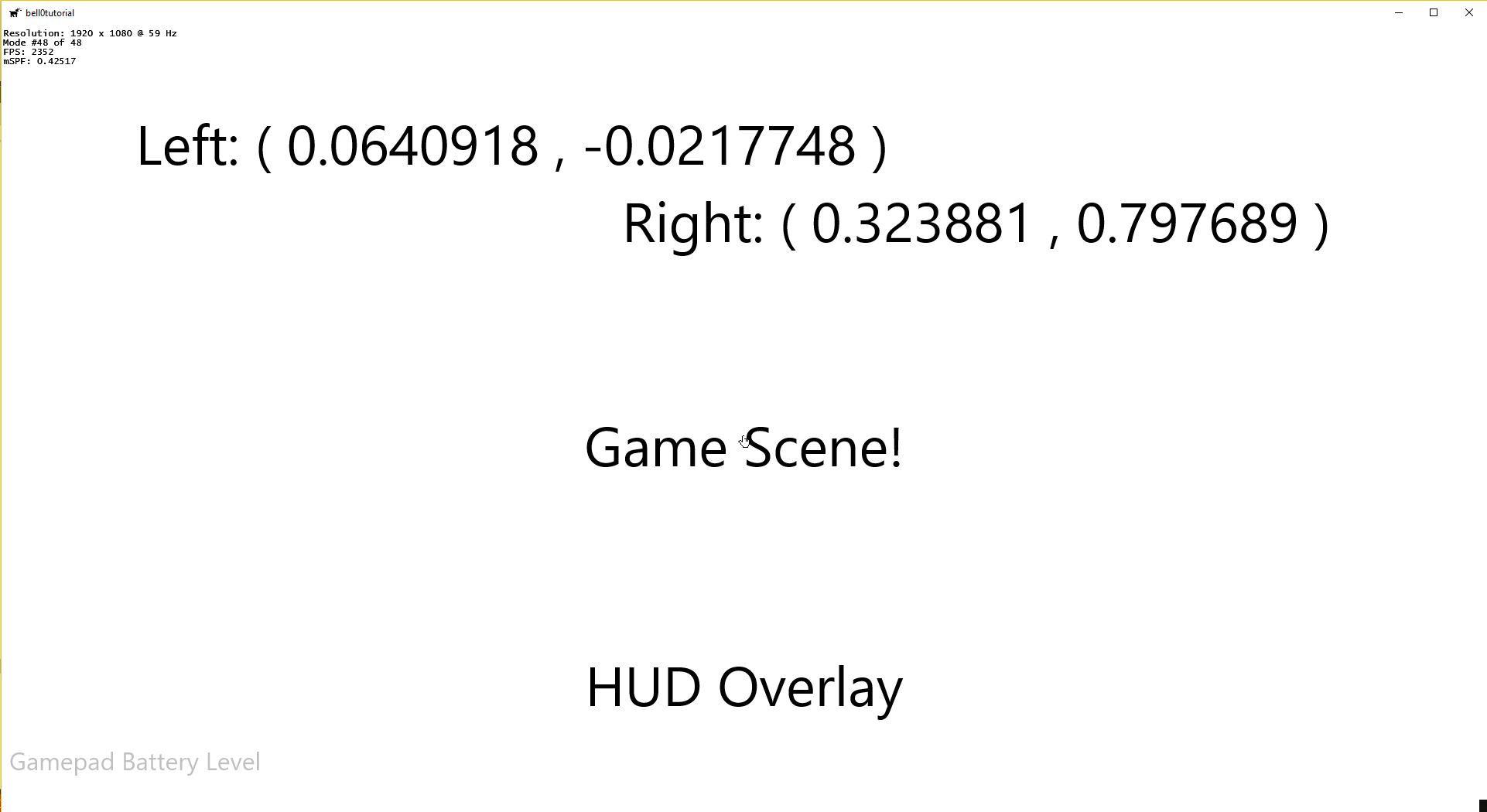 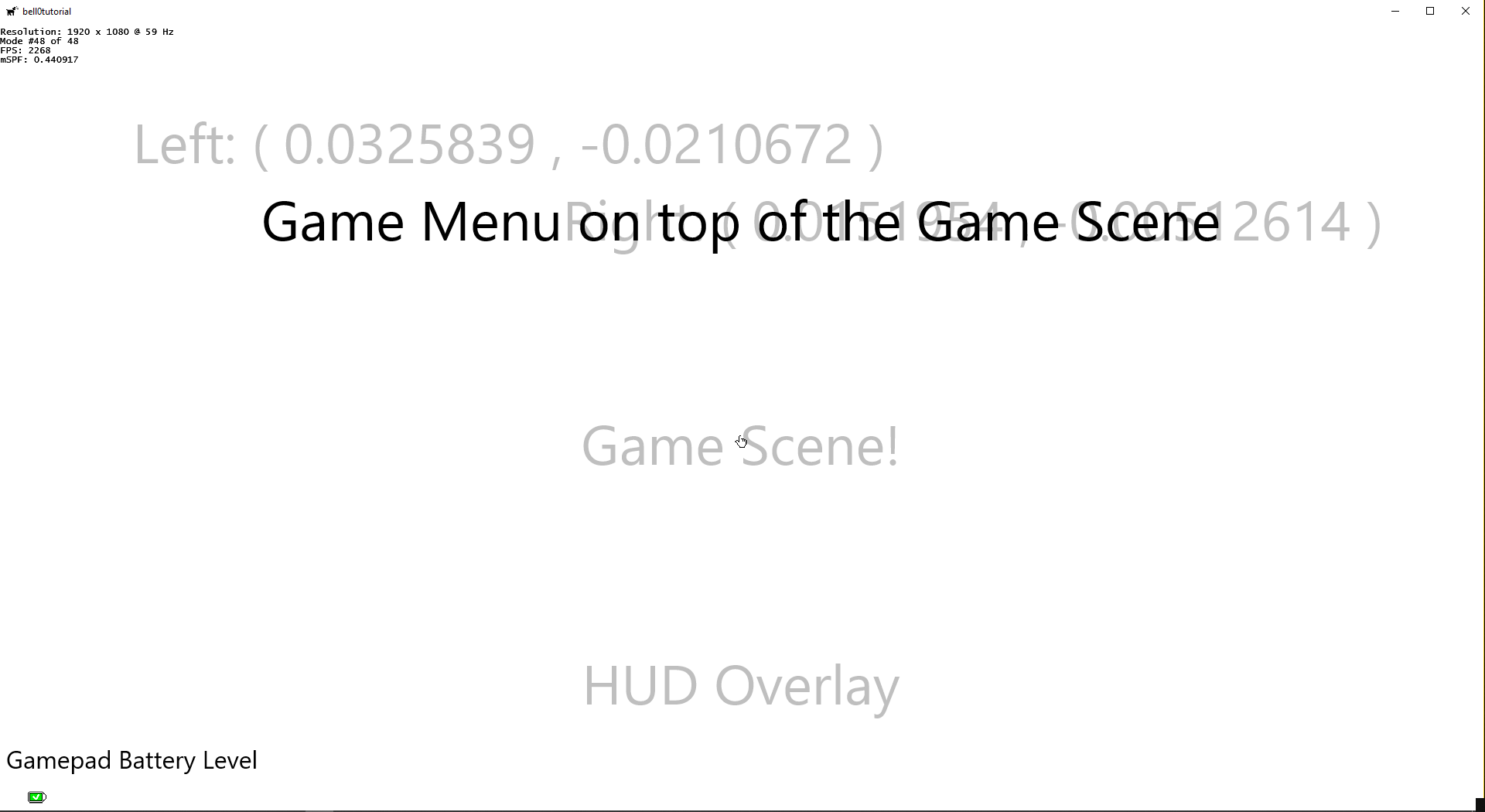 In the next tutorial we will learn how to implement an event-queue. 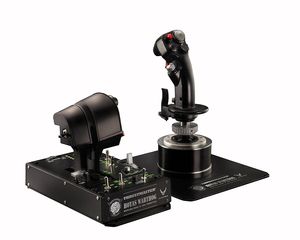 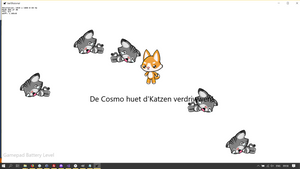