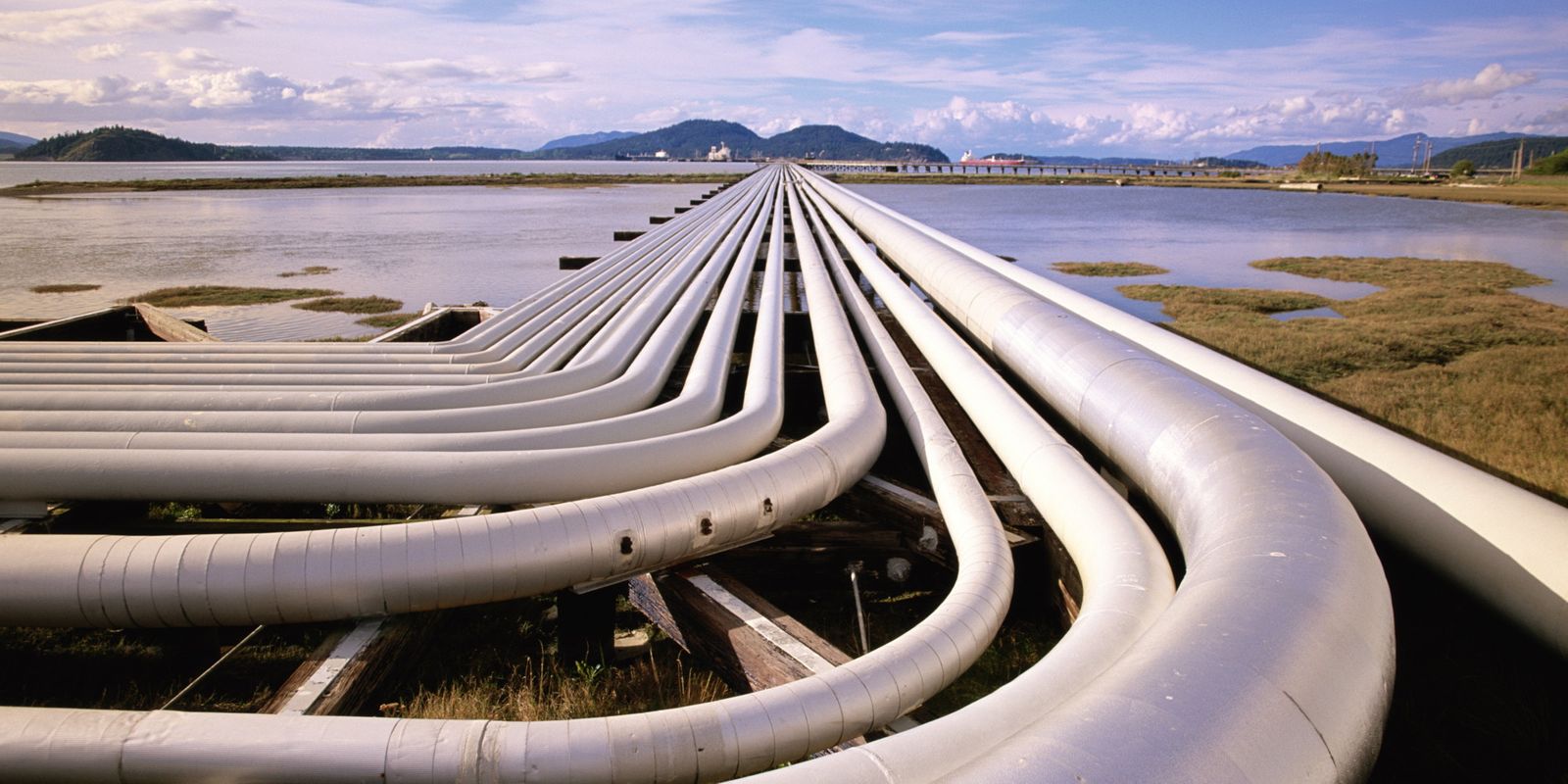 You can have it in any color you want, as long as it is black.

As seen in a previous tutorial about drawing triangles, to actually render pixels to the screen, DirectX uses objects called shaders. The entire rendering process is controlled by the graphics rendering pipeline, basically a series of steps which take vertices as input and result in a fully rendered image. Such a pipeline is programmed by the above mentioned shaders, thus a shader is actually a small program that controls one step of the pipeline.

Once a 3D model has been created, the graphics pipeline is the process of turning that 3D model into the image seen on the computer monitor. Because the steps required for this operation depend on the software and hardware used and the desired display characteristics, there is no universal graphics pipeline suitable for all possible cases, however, Direct3D (and OpenGL and Vulkan and other APIs) does unify similar steps and controls the graphics pipeline of the GPU.

The typical tasks tackled in the application step are, for example, collision detection, character animation and acceleration techniques such as spatial subdivision schemes to reduce the amount of main memory required at a given time, as, for example, the worlds of modern computer games are far too big to actually fit into the memory at once. We will cover those techniques in later tutorials.

The application step is executed by software on the CPU; on multi-core systems, the software can be parallelized. After the necessary steps (collision detection, animation, ...) are done, the new scene with all its primitives, usually triangles, lines and points, is then passed on to the next step in the pipeline, the geometry step.

The geometry step is responsible for the majority of vertex operations. It can be divided in five major parts; the actual details depend on the particular implementation of the pipeline:

A vertex is a point in the game world. Many vertices can be used to define geometrical objects, such as triangles. A triangle is the most common geometric primitive used in computer graphics. It is defined by three vertices and a normal vector specifying the front face of the triangle. We will talk about this in further details in later tutorials. Just notice that triangles are preferred over rectangles, because triangles always exist in a single plane.

In this stage, the coordinates of each object are computed based on its position in the game world. There will be an extended tutorial about this subject later on.

In addition to the objects, each scene of the game world also defines a virtual camera (the players viewpoint, for example) that indicates the position and direction of view from which the scene is to be rendered. To simplify later projection and clipping, the scene is transformed so that the camera is at the origin, looking along what is usually called the z-axis. The resulting coordinate system is called the Camera Coordinate System and the transformation is called Camera Transformation or View Transformation.

The 3D projection step transforms the view volume into a cube with the corner point coordinates (-1, -1, -1) and (1, 1, 1). This step is called projection, even though it transforms a volume into another volume (since the resulting z-coordinates are only used in z-buffering in the later rastering step).

To limit the number of displayed objects, two additional clipping planes are used, transforming the visual volume into a truncated pyramid called the View Frustum (once again, we will cover all of this in a later tutorial). 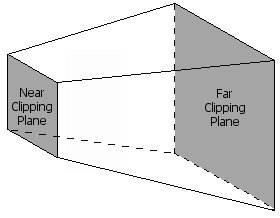 Scenes often contain different light sources to create a more realistic lighting simulation. Based on those light sources and material properties of the triangles on the scene, a "light" value is computed for each vertex.

Only the vertices which are within the visual volume (frustrum, see above) need to actually be drawn to the monitor, all other primitives are discarded. This process is called frustum culling.

Most of the geometry computation steps are performed in the vertex shader. Since version 10, DirectX requires a custom vertex shader, while older versions still have a standard shader.

In the rasterisation stage of the pipeline, the continuous primitives are transformed into discrete fragments, basically speaking, the pixels visible on the screen. The Pixel Shader, the shader controlling the rasterization step, is run once for each pixel in the scene, performing, for example, the following duties:

We will now give an overview over the pipeline as used in DirectX 11: 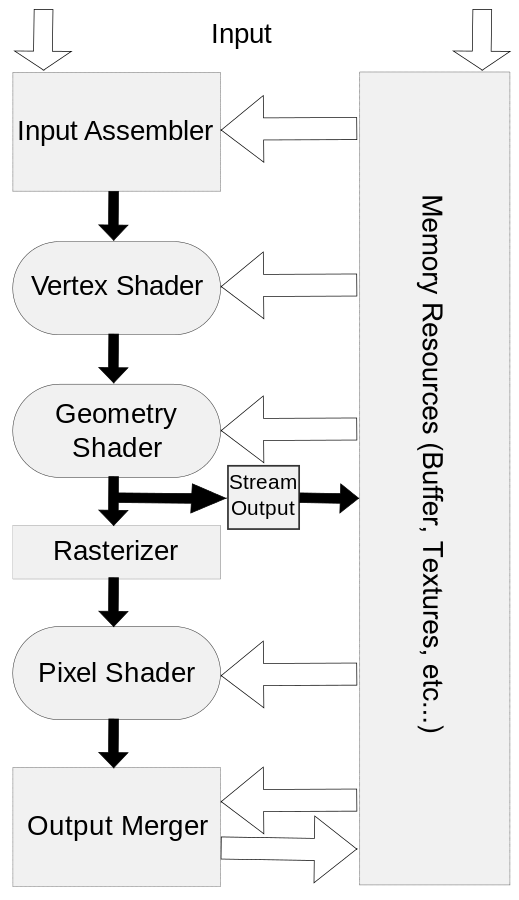 The first stage of the DirectX rendering pipeline is the input assember. This is a very simple stage, it simply collects all the data from the video memory and prepares it to be used by the pipeline. This is done automatically, and we have used the input assembler in previous tutorials already, when we used the following functions to define the topology of our objects.

The following four methods can be used to control the input assembler stage, note that the names all begin with IA, which obviously stands for Input Assembler:

This tells the input assembler which vertex buffers to read data from.

This tells the input assembler about the structure of the indices in the vertex buffers.

This method describes the layout of the vertex data. Here is an example of a previous tutorial:

This method defines the topology, or what type of primitive, to use.

Here is an example from a previous tutorial, the method to actually render the scene makes use of this method:

Although not much can be done at the input assembler stage, this stage is nonetheless the primary bottleneck in graphics processing: the fewer vertices that pass through this stage, the faster the graphics engine!

As noticed above, this is where most of the work is done. In DirectX 11, there are six stages which modify the values of vertices: the Vertex Shader stage, the Hull Shader stage, the Tesselator stage, the Domain Shade stage, the Geometry Shader stage and the Stream Output stage. All but one of those stages are optional, namely the vertex shader, as noted above.

As explained above, the vertex shader modifies the properties of each vertex in the scene, for example, to convert 3D coordinates to screen coordinates. The vertex shader is thus a function that is executed once per vertex. The parameters of the function are the information sent from the vertex buffer: in our previous tutorials, those information consisted of the location and the colour of each vertex.

The vertex shader can be used to modify those values, for example, a special effect to darken all the colours in the scene could be applied by halving the values of each colour. We will talk more about this in the next tutorial.

Once the vertex shader returns, the vertices run through these three optional and advanced stages of the pipeline. The purpose of those stages is to take single triangles and to break them into many smaller primitives really quickly, but we will talk about this in later tutorials.

The geometry shader stage is optional as well, and instead of working with vertices, it operates on primitives, i.e. triangles or rectangles.

This automatic stage is basically the opposite of the inputer assembler stage, it takes vertices from the pipeline and stores them back into video memory.

The rasterizer stage is not programmable and done entirely by the hardware. In previous tutorials we have already used the RSSetViewports function to set the desired viewport for clipping:

The pixel shader is similar to the vertex shader, but it is run once for each pixel on the screen.

That's it already. In the next tutorial we will give a brief overview over the semantics of the High-Level Shader Language.

May 19, 2018
Comments
×You've successfully subscribed to bell0bytes
×Great! Next, complete checkout for full access to bell0bytes
×Welcome back! You've successfully signed in.
×Unable to sign you in. Please try again.
×Success! Your account is fully activated, you now have access to all content.
×Error! Stripe checkout failed.
×Success! Your billing info is updated.
×Error! Billing info update failed.