This tutorial introduces the notion of friction. Basically speaking, friction is any force that retards or consumes energy from another system - like Facebook.

In all previous tutorials, all surfaces were assumed to be smooth and that objects could slide as far as they wanted, without encountering any resistance to their motion. Yet it is clear that no surface is perfectly smooth, as even the smoothest looking surfaces are rough and jagged when viewed at the atomic level.

People often associate friction as something that should be reduced and eliminated at best. For example, automobiles use roughly forty percent of the available energy to overcome friction from thermal conversion or mechanical frictions, which means that about twenty percent of the gasoline tanked is used for nothing but to overcome internal frictions. Clearly, reducing that friction would be very desirable.

On the other hand, however, there would be no movement without friction. It is the friction between our feet and the Earth that allows us to move - just look at how hard it is when friction is but reduced when trying to walk on ice, for example.

Let $\vec{f} \in \mathbb{R}^n$ be a force. As in the previous tutorials, by abuse of language, we will write $f = \lVert \vec{f} \rVert$, if it is clear, from the context, that we are only interested in the magnitude of the force, and not in its direction or sens.

It is also important to note that the magnitude of kinetic friction does not depend on the relative speed of the surface, nor on the area of contact between surfaces. This second statement might be a bit counterintuitive, but it follows the same reasoning used when computing the centroid of a convex polygon: If the area of contact is quite large, the normal force is spread out over a large area, resulting in small forces per area, thus the atomic imperfections are not pressed as deeply against each other. If the area of contact is small, the atomic imperfections in that area come into consideration with full force.

Static friction is the force that keeps two surfaces from moving relative to one another - once again due to atomic imperfections of the surfaces that are in contact. Static friction is often stronger than kinetic friction, because when surfaces are in static contact, their imperfection, i.e. the microscopic hills and dents, had time to deeply nestle into each other.

As for kinetic friction, the static friction does not depend on the area of contact.

Imagine a car driving on the road with the tires rolling freely. Is the friction between the tires and the road kinetic or static?

The answer might be a bit surprising, the friction between the tires and the road is actually static. An easier way to understand that, is to watch your own motion: Each time your foot is on the ground, it is actually static, as in, not moving relative to the ground. The same is true for the tires of a car: as long as the tires are rolling, the friction is static - if the car skips, however, the friction is kinetic. It follows that a car can be stopped in less distance over time if its wheels are rolling than if its wheels are locked up, which is the idea behind the anti-lock breaking system (ABS). When the brakes are applied on a car with ABS, an electronic sensor detects whether a wheel is about to start skidding, and if so, a small computer quickly modulates the hydraulic pressure in the brake lines in short bursts, causing the brakes to release and then reapply in rapid succession. This way, the tire can continue rolling, thus static friction still determines the stopping distance over time.

As seen in the previous tutorial, all forces can be represented in the same way $\sum\limits_{\vec{f}\in \mathcal{F}}\vec{f} = m \cdot \vec{a}$, thus, to model friction, it is enough to add the magnitude of the frictional force as a negative acceleration to the by now well-known equation of motion $\ddot{x} = f(t,x,\dot{x}),$ and once again the symplectic semi-implicit Euler integrator will do all of the hard work for us. Note that it is possible to apply as many frictional forces to an object as needed, by simply adding them up.

As an example, I created a small kicker or air hockey demo. Pressing the space button fires a ball on a virtual kicker table in a random direction. Using the arrow keys, the direction of movement and the initial velocity of the ball can be changend. The keys "Q" and "A" can be used to increase or decrease the coefficient of kinetic friction.

The position of the ball is updated using semi-implicit Euler, as follows:

Once the symplectic integrator returns the new position and velocity of the ball, the new acceleration is set to point in the opposite direction of the movement using the std::copysignf function.

Note that to simulate collisions with the rectangular table, it is sufficient to remember that the angle of reflectant equals the angle of incidence. Read the tutorial about basic collision response for more details on this subject.

Friction on an Inclined Plane

To see what happens, we break down the forces into their $x$- and $y$-components.

Now what happens when the mass actually starts to slide? As we have seen, the movement is governed by the following equation:\[\sum F_x = m \cdot g \cdot (\sin \varTheta - \cos \varTheta \cdot \mu_k).\]Note the use of the coefficient of kinetic friction in this formula!

To use this in a game, remember that $F = m \cdot a$, thus each cycle the velocity of the mass is increased by $a_x = g \cdot (\sin \varTheta - \cos \varTheta \cdot \mu_k)$ in the $x$-direction. Just note that all the computations were done in the coordinate system defined by the object itself. To use the coordinate system of the underlying screen, simply multiply the new velocity vector by the vector $(\cos \varTheta, -\sin \varTheta)$, where $\varTheta$ continues to be the angle of inclination: 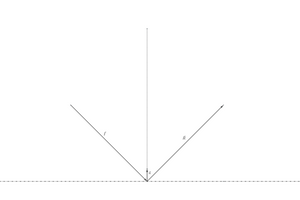