With the fall of its sister planet, Chau Sara, the inhabitants of Mar Sara were scared to death. And rightly so. Rebel Yell follows the newly elected magistrate of Mar Sara on his mission to bring order and justice to his fellow Mar Sarians.

One of the first grim duties that had to be carried out, was to salvage the wreckage around Chau Sara. Three reckless young men, Jim, Joeyray and an unnamed Spaniard, agreed to fly out and to recover whatever materials they could. Upon discovering that some of the wreckage appeared to be of alien origin, their recovery mission was brought to an abrupt end by a ruthless attack of an unidentified alien ship.

I think that’s what really scared the military about the vaporization of Chau Sara: that there was something else out there that was just as crazy as we were. And they were better at it than we were.

The Confederacy knew of Mar Sara's infestation; outland colonist stations had begun going silent in early December and the day before Chau Sara's destruction. As the new magistrate receives basic instructions on how to run a terran colony, a reconnaissance mission confirms zerg presence on the planet.

The Confederacy has quarantined this entire planet, and we’ll proceed with the lock-down within 48 hours. You’re to relocate your core colonists to the outlying wastelands.

With the Zerg threat confirmed, the Magistrate received orders from Confederate General Edmund Duke, to relocate the core colonists to the wastelands outlying the Mar Sara Colony. This decision was very unpopular with the colonists.

The local marshal, James Raynor, was thus to meet a small group of these colonists and to escort them to Backwater station.

To make sure the colonists could defend themselves against eventual Zerg attacks, James Raynor trained a small group of marines. Together they cleared the surrounding lands of stray Zerglings - small dog-like, yet very aggressive Zerg specimen.

Soon afterwards, the magistrate realized that a distress beacon had been activated early in the morning. Zerg forces were attacking Backwater Station. When General Edmund Duke showed no eagerness to rush into battle to safe the colonists, James Raynor grew more and more frustrated with Confederate politics.

Unwilling to neither sacrifice the lives of the colonists entrusted to him, nor the lives of those trapped in Backwater Station, Jim and the magistrate made a deal: the marshal would head out on his own and do whatever he could, while the magistrate sent in a force of militia to secure the station.

By the time James Raynor and the magistrate arrived in Backwater Station, most of its inhabitants had been holed up in bunkers for days - a stalemate had developed between the militia of the station and the Zerg attackers; the latter having established creep colonies to south and east of the station. Nevertheless, Raynor and his forces pushed forward, liberating the station.

Eventually they reached "Anthem Base", a small isolated mining town that had been overrun by the Zerg a few days earlier. In one of the abandoned buildings James Raynor found a survivor - UNN reporter Michael Liberty.

After having rescued the reporter, the militia advanced to a strange looking Terran command center with creep growing all around and all over it. Immediately Zerglings and Hydralisks rushed in to defend the infested structure, but they were no match for Jim's little army. They quickly dispatched the small Zerg force and burned the infested command center to the ground. The Zerg threat had finally been neutralized.

Guess you wouldn’t be a Confederate if you weren’t a complete pain in the ass.

As the militia turned around to go back to Blackwater Station, they were hailed by General Edmund Duke who promptly arrested the entire group for destroying a "vital Confederate installation". The militia, Liberty excluded, were taken prisoner and hauled to the prison ship Merrimack; leaving James Raynor even more bitter and frustrated at the typical political bullshit the Confederacy kept playing even when facing certain extinction from an alien race.

As Raynor and his militia are held captive by the Confederacy, two marshals patrolling the wastelands are ambushed by a small Zerg force.

Before the magistrate could even talk to the Confederacy about what happened at Blackwater Station, his adjutant chimed in with a battle report: "Sixteen outland stations have reported sightings of the alien invaders identified as Zerg. The Confederates have arrested all standing militia forces and continue to avoid action against the zerg. Three stations have fallen to the Zerg already. We've been unable to locate any source of military relief except the extremist faction known as The Sons of Korhal."

Arcturus Mengsk, the leader of the rebel group, made the magistrate an offer - he would send down a number of transports to the Mar Sara Colony and evacuate any survivors. Left with little choice, the magistrate accepted the offer.

With the help of the now better equipped militia, the magistrate orchestrated the defenses of Backwater station to fend off the Zerg long enough for the Sons of Korhal dropships to arrive and to escort the colonists to safety.

Unknown to the magistrate, a part of the 417th Confederate Marine Platoon, namely Lieutenant L. Z. Breanne, squad sergeant Jon Littlefield and private Melnikov, was conducting a "reconnaissance-in-force" mission near Backwater station. Their order: to retrieve a mysterious little box. Near the box they also found an unconscious woman.

As the Zerg were distracted by the 417th Confederate Marine Platoon, the magistrate was able to hold the defenses of Backwater Station together long enough for his troops as well as the civilians to escape in the Son’s Dropships.

The retribution of the Confederacy was swift. The magistrate was immediately released from his duties until the pending official investigation of his affiliation with the Sons of Korhal was finished. Politics still mattered more to the Confederacy than defending mankind from the alien threat.

Despite his spirited defense of the colonists against the Zerg threat the magistrate was branded as a traitor as he had dared to ally himself with what the Confederate media portrayed as the worst terrorist group in the entire Koprulu sector.

All the while, Michael Liberty and a Sons of Korhal task force boarded the prison ship Merrimack and rescued Raynor and the Mar Saran militia arrested at Anthem Base. Thoroughly disgusted with the Confederacy, and with the looming threat of the imminent destruction of his homework, it did not take Arcturus Mengsk much to persuade Raynor and the militia to join his rebel army. Raynor was awarded the rank of captain and assigned to lead the newest unit of the Sons of Korhal, unofficially named "Raynor's Rangers".

Ah, Marshal Raynor. Michael apparently thinks very highly of you and your men. I was wondering if you would be willing to help me in a small matter.

With Mar Sara almost completely overrun by the Zerg, both the Confederates and the Sons of Korhal were planning to evacuate the planet. Before leaving, however, Arcturus convinced the former magistrate to assist James Raynor and his rangers to infiltrate the Jacobs Installation, a Confederate weapon factory. Raynor himself led the raid on the Jacobs Installation to access the Confederate network and retrieve what he believed to be weapon designs.

Inside, however, they discovered live Zerg in captivity. Raynor was horrified when he realized that the Confederacy had known about the Zerg all long but decided to keep that knowledge secret.

After retrieving the data discs, Raynor and the magistrate were ferried to the Hyperion, where they watched the unknown alien ships bombard Mar Sara to dust. As his homeworld was annihilated by fire, a coldness overtook Raynor. He swore he would do anything to bring the Confederacy down.

<< The Battle of Chau Sara Episode I - Rebel Yell: Revolution >> 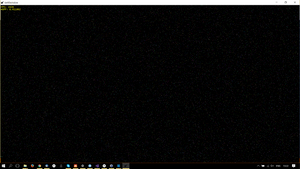