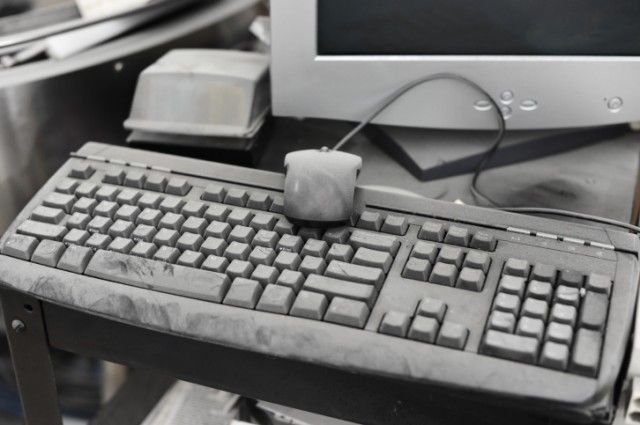 The mouse was just a tiny piece of a much larger project,
aimed at augmenting human intellect.

Eventually DirectInput will be responsible to handle user input, yet it is still helpful to learn how to use the Win32 library to access the keyboard and the mouse to handle basic input functionality.

A keyboard basically consists of a number of keys, a microcontroller and some support electronics. The first IBM PC came with a keyboard that had snap-action switches that gave tactile feedback and made clearly audible clicks when the keys were pressed far enough. Today most cheaper keyboards have keys that simply make mechanical contact when depressed, while more sophisticated keyboards have a magnet under each key that passes through a coil when struck, thus inducing an electromagnetic current that can be detected. This article is being written on a tactile mechanical keyboard with audible clicks.

Depressing a key generates an interrupt which invokes the keyboard interrupt handler on the operating system. This interrupt handler reads a hardware register inside the keyboard controller to get the number of the key that was just pressed. A second interrupt is created once a key is released, this way, depressing the "Shift" key, then depressing and releasing the "X" key, the operating system notices that a capital "X" should be written.

Windows processes this incoming stream of information and sends keyboard event messages to the application window, which the message procedure of the window then has to handle. More precisely, depressing a key on the keyboard generates two sets of data: the scan code and the ASCII code.

The scan code treats the keyboard as a set of different switches: The scan code registers when a single key is depressed, but it holds no information on whether any combination of multiple other keys was depressed as well. Scan codes are handled by the WM_KEYDOWN message.

The ASCII code, on the other hand, gives detailed information on what key-combination was depressed. ASCII codes are handled by the WM_CHAR message.

Continuing the above example, scan codes see no difference between "X" and "Shift" + "X", whereas in ASCII code, depressing "X", results in a small "x" and depressing "Shift"+"X" results in a capital "X".

In the context of computer games, scan codes usually carry all the information needed. The WM_KEYDOWN message has two parameters, wParam, which contains the virtual-key code of the key that was depressed, and lParam, which stores additional information, such as the repeat count, i.e. number of times the keystroke was repeated as a result of the user holding down the key.

A window procedure could handle the WM_KEYDOWN message like this:

The onKeyDown function could then simply switch over the wParam:

There is a similar message sent when a key is released, head over to the MSDN to look it up.

This is all nice and easy, but what if access to the keyboard outside of the main event loop is desired? The answer is the GetAsyncKeyState function. This function determines whether a key is up or down at the time the function is called, and whether the key was depressed after a previous call to GetAsyncKeyState.

GetAsyncKeyState could be used to poll for the status of single keys (whether that is a smart thing to do or not, is another question). Its prototype is as follows:

All that has to be done is to feed the function with a virtual-key code and if the high bit of the return value is $1$, then the key is depressed, otherwise it is not. This way, information about the status of any key on the keyboard can be requested at any time.

The following two utility functions do just that:

Using those functions, keyboard input can be queried for during any moment in the game, for example during the main game loop (again, whether this makes sense or not, is another discussion):

The mouse is the most common way of allowing users to point at the computer screen and was the answer to the cries of those computer users that were not computer specialists. Way back, computers of the ENIAC generation were used by the same people that built them, and for a long while, computers were still mostly operated by specialists. Their chosen input: the command line interface! Non-specialists, however, saw those interfaces as downright hostile.

The salvation for us mere mortals came with a patent applied for in 1967, and received in 1970, by Dr. Douglas Carl Engelbart, for a wooden shell with two metal wheels. The patent application described this device as an "X-Y position indicator for a display system". Engelbart himself later said that this device was nicknamed the "mouse" because "the tail came out the end". As is often the case, Mr. Engelbart never received any royalties for his invention. During an interview, he said "SRI patented the mouse, but they really had no idea of its value. Some years later it was learned that they had licensed it to Apple Computer for something like $40,000." He had, however, changed the life of countless people around the globe.

Nowadays a mouse is a small plastic "box" that eagerly awaits for its owners return on the table next to the keyboard. When it is moved around on the table, a little pointer on the screen moves with it, basically allowing the user to point at the screen. Mice also have a variable amount of buttons, I would say naive users prefer one button, since that makes it harder to press the wrong button (Hello Apple)! Gamers usually prefer mice with multiple (surely more than two) buttons to better handle the exciting stress encountered during games.

Let there be LED!

Mechanical mice had two perpendicular rubber wheels (now replaced by a ball) protruding through the bottom. On mouse movement parallel to its main axis, one of the wheels turned, on movement perpendicular to its main axis, the other wheel turned. By measuring changes in the resistance, it was possible to determine how much each wheel had rotated and to thus compute how far the mouse had moved in each direction.

Optomechanical mice have a rolling ball, rotating two shafts aligned perpendicularly to each other. The shafts are connected to encoders that have slits through which light can pass, and as the mouse moves, the shafts rotate and light pulses can strike the detectors; obviously then, the amount of pulses detected is proportional to the amount of motion.

The optical mouse has no ball ( and such it is definitely not a suitable mouse for Mr. Kahn). Instead, the first mice of this kind had a Light Emitting Diode, or LED, and a photodetector on the bottom. As the mouse moves across special lattice surfaces, the photodetector senses how many lattice cells have been crossed by seeing the changes in the amount of light being reflected back, which electronics inside the mouse then translate to actual data about the mouse movement.

Modern, now surface-independent, optical mice deploy an optoelectronic sensor which takes successive images of the surface on which the mouse is moved around. Integrating special-purpose image-processing chips into the mouse hardware, enabled the mouse to detect motion on many different surfaces.

The first modern optical mice were introduced in 1999 by Microsoft, the famous IntelliMouse, based on technology developed by Hewlett-Packard. In 2004 Logitech then started another revolution with its MX 1000 laser mouse. Using a small infrared laser instead of an LED significantly increased the resolution of the image taken by the mouse, enabling superior surface tracking compared to LED-mice. By 2009 Logitech introduced laser mice with two lasers, the "Darkfield"-mice, capable of tracking movement even on reflecting surfaces, such as glass.

The most common way for a mouse device to send messages is to send a data stream of three bytes each time it is moved at least a minimum distance. The first byte contains information about the movement in the "x-axis", while the second byte tells about movement in the "y-axis". The third byte encodes the current state of the mouse buttons. Low-level software in the computer then collects this information and converts the relative movements sent by the mouse to an absolute position.

There are many Windows messages related to the mouse, for now only two are covered in this tutorial.

The WM_MOUSEMOVE message contains the position (relative to the client area of the window - (0,0) being at the top left corner) of the mouse.

The position of the mouse is encoded in the lParam parameter while the wParam parameter holds information about the state of the different mouse buttons (MK_LBUTTON, MK_RBUTTON, MK_MBUTTON, ...).

Here is an example of how to handle this messages:

To test whether a mouse button was pressed (or released), Windows offers messages of the form $X$BUTTON$Y$, where $X \in \{\text{L},\text{M},\text{R}\}$ and $Y \in \{\text{DBCLK}, \text{DOWN}, \text{UP}\}$. Those button messages also have the mouse position encoded in their lParam.

The window procedure would do something like the following to handle mouse message:

That's it folks. For now, we simply use the window procedure to handle keyboard messages and if the Escape key is pressed, the game closes.

In the next tutorial we will learn how to add custom resources to our window.

<< The Game Loop Of Icons and Cursors >>

Of Icons and Cursors