Without input, games would be a static form of entertainment, much like film or television.

There are a plethora of input devices in existence today: from the common keyboard, mouse and joystick, the mobile versions such as touch screens and accelerometers, to the newer more exotic devices such as the WiiMote, guitar controllers and the head-tracking devices of modern virtual reality headsets.

Most forms of input are either analog or digital, i.e. they either have a range of values or a binary state. A joystick, for example, is an analog device, whereas a keyboard is a digital device. Gamepads, however, usually have both analog and digital components (think of the analog pad and the buttons on a modern Nintendo controller).

It is also important to consider that some games require the input system to be able to handle key chords and key sequences. A chord, in analogy to music theory, is defined as multiple buttons pressed at once, and a sequence is a series of inputs, think of the special moves used in fighting games.

The following series of tutorials builds upon the previous tutorial about keyboard and mouse input to explain and implement a robust high-level event-based input system to handle keyboard, mouse and joystick/gamepad input. The input system will have a basic implementation to also handle chords, but sequences are beyond our scope at the moment (hint: state machine). The input system will acquire keyboard and mouse data from raw Windows input and DirectInput will be used to poll joysticks and gamepads.

An event-based input system is what we had implemented so far, our engine acted whenever input messages were on the message queue and while that system worked fine, it had severe limitations, for example, what if the user decided to charge his weapon, by holding space, before firing a devastating volley at his enemies? The current system was unable to easily detect whether a key was pressed for a longer period of time or not.

Obviously Windows had to poll the keyboard and the mouse from time to time to actually create those input events. What we want to do is to poll for the keyboard and mouse state ourselves. There are two ways to do so, which we can illustrate by a small story inspired by S. Madhav.

Imagine driving to BlizzCon, in a bus, with all of your friends. They are obviously all excited and they can't help but to ask, every damn minute: "Are we there yet?". They keep asking over and over again, until the bus finally arrives at the Anaheim Convention Center, at which point the answer to their question is "Yes!".

Now imagine driving a large bus, with not only your friends, but, I don't know, an entire Blizzard fan club. And they all ask the same question over and over again: "Are we there yet?". This sounds annoying right? Annoying for the driver, and a terribly waste of energy on the part of your friends and colleagues from the fan club, they will be so exhausted that they won't be able to actually enjoy BlizzCon. What a shame!

The just described scenario is essentially a polling system, everyone keeps polling for the result of a query. In an input system this translated to every object that is interested in, for example, the space bar being pressed, continuously has to query for the event: "Is the space bar pressed." Obviously this is not a good design for an input handler, as over and over again, every single frame, a function to get the state of a keyboard key would be called with the space bar as input, leading to a duplication of code and introducing bugs, such as if the state of the keyboard changes in the middle of frames.

So what can we do? Imagine driving to BlizzCon again, but this time, you want to have some peace of mind while driving. What can you do? You could implement an event-based system: your friends can register to an event, in this case, the arrival at the Anaheim Convention Center, and once that events occurs, you simply notify them. This leads to a serene drive to the convention center and a simply notification to all your friends once you have arrived.

Translating this idea back to an input system, we see that now the polling is done in only one location in the code. Just as the driver had to check whether he had arrived at the convention center or not, the input system must query for the state of the input devices and notify everyone interested when a change occurred.

This all sounds nice and easy, but one question remains. Where, in the game loop, should the input go? I think a good place to query for user input is just before the update method, such that the last input state set by the player is acted upon during the next frame.

<< Game Programming Banging on the Keyboard >> 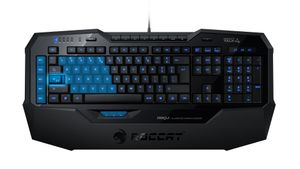 Banging on the Keyboard

Banging on the Keyboard