On the other side of the planet, the game programming community was still chanting "DOS TILL HELL FREEZES OVER!", and I was out in front burning a Windows 3.1 box myself! However, in 1995 hell did start to freeze over ...

To start our journey, we create an empty Win32 project in Visual Studio and then, as tradition dictates, we let our program greet the world.

The WinMain function is the equivalent of the standard C main() function and as such it is the starting, or entry point of any Windows application written in C or C++:

A __stdcall function has a fixed number of parameters - and pushes them on the stack in reverse order (right to left) -, thus the called function can perform the stack cleanup operation. This saves code space as cleanup needs to be done only once per __sdcall function.

For further information on "Argument Passing" and "Calling Conventions", have a look at the corresponding MSDN entry.

Now let us have a look at the parameters of the Winmain function:

This parameter is the instance handle that Windows generates for your application. An instance is, loosely speaking, a copy of an application. More precisely, an instance is a concrete occurrence of any object, existing usually during the runtime of a computer program. Since it is possible to do multitasking and to run multiple copies (instances) of the same program, Windows needs a way to keep track of all running programs (and its instances). This is done by giving each instance of any application a unique number. As soon as a program is executed, Windows creates this number and stores it into the HINSTANCE hInstance parameter.

It stands for a handle to the previous instance, that is, the handle of the last instance to be created. This is a relic of the past: it dates back to the old days, way back before 32-bit processors came into play, when multiple instances of the same program had to share the same memory space. That was obviously a bit more complicated and programmers had an interest in detecting any running copies of their program.

The following explanation is borrowed from Raymond Chen from Microsoft:

In 16-bit Windows there was a function called GetInstanceData. This function took an HINSTANCE, a pointer, and a length, and copied memory from that instance into the current instance. Now, since 16-bit Windows had a common address space, the GetInstanceData function was really nothing more than a hmemcpy, and many programs relied on this and just used raw hmemcpy instead of using the documented API.

This was the reason to introduce the hPrevInstance parameter to WinMain. A non-null hPrevInstance was the instance handle of a copy of the program that was already running. Then GetInstanceData could be used to copy data from the already running program instance, for example, it was used to copy the main window handle out of the previous instance to be able to communicate with it.

Now in 32-bit Windows instances were no longer a thing, thus the designers had to answer one big question when porting WinMain: What to pass for hPrevInstance? The newly introduced separate address spaces meant that programs that skipped over reinitialization in the second instance would no longer work. Their solution was surprisingly simple: hPrevInstance was always set to NULL, thus making all programs believe that they are the first one.

And amazingly, this actually worked.

To take up LaMothe's quote, at some point in the past

Windows 95 was released, and it was a true 32-bit, multitasking, multi-threaded operating system. Granted, it had some 16-bit code left in it, but for the most part, Windows 95 was the ultimate development and release platform for the PC.

Nowadays Windows still provides each application with its own memory space thus hPrevInstance is now obsolete. As explained it only exists for backward compatibility and is equal to NULL in every application, despite the existence of other copies. For a method of detecting other running instances of a program, check the MSDN.

This final parameter is simply an integer that is passed to the application during launch, indicating how the main application window is to be opened. For instance, this could call for the window being minimized or maximized.

If an application displays a window for the first time, it should specify the SW_SHOWNORMAL flag, which, if necessary, restores the window to its original size and position and then simply activates and displays the window. Check the MSDN for more information.

From the MSDM: If the function succeeds, terminating when it receives a WM_QUIT message, it should return the exit value contained in that message's wParam parameter. If the function terminates before entering the message loop, it should return zero. This is a bit cryptic, but it will become clear a few tutorials from now: Our program will simply return $0$ until we learn how to handle Windows events.

The tradition of using the phrase "Hello world!" as a test message was influenced by an example program in the seminal book The C Programming Language.

The example program from that book prints "hello, world" and was inherited from a 1974 Bell Laboratories internal memorandum by Brian Kernighan, Programming in C: A Tutorial, which contains the first known version.

We will close this tutorial with a "hello, world" message in the Win32 environment. For information about the MessageBox function, check the MSDN.

In the next tutorial, we will learn how to handle exceptions with C++. 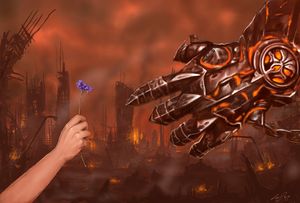