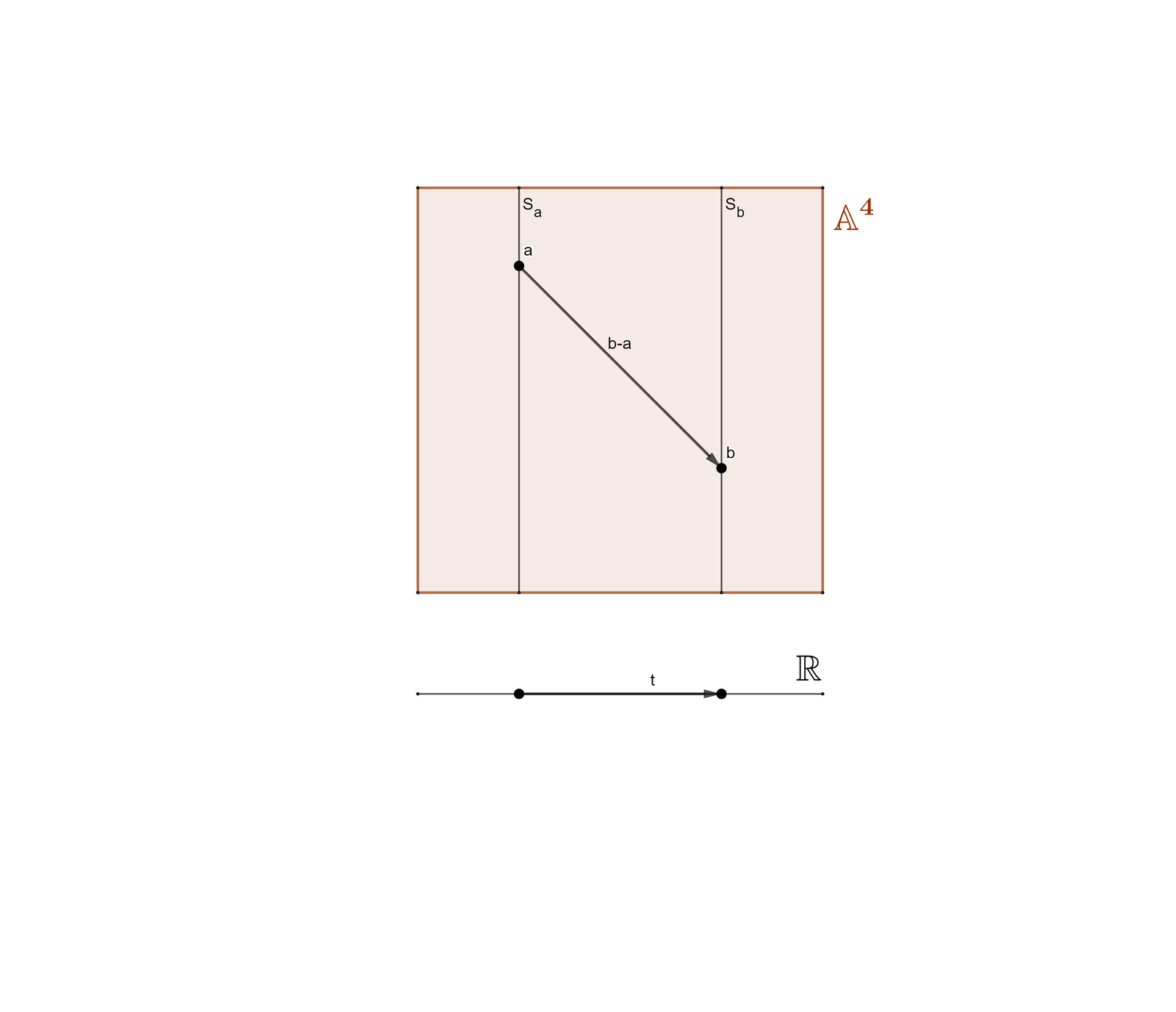 In a few previous tutorials, we briefly talked about physical properties, without really explaining the mathematics behind those concepts. This tutorial tries to remedy that situation. In what follows, space is three-dimensional and euclidean, and time is one-dimensional.

The goal of this tutorial is to define and investigate the structure of space-time and the corresponding group of transformations and to analyze the constraints imposed by Galileo's principle of relativity on Newton's equation of motion.

In the tutorial about Newton's three laws of motion, Galileo's principle of relativity was briefly mentioned when the concept of an inertial frame of reference was explained. Galileo stated that there exist coordinate systems, called inertial frames of reference, possessing the following two properties:

In other words, as seen in the example in the previous tutorial, if a coordinate system attached to the earth is inertial, then it is impossible to detect the motion of the train, which is moving uniformly in a straight line, by experiments conducted entirely inside the cars of the train.

In this tutorial about kinematics it was mentioned, that Newton determined that the initial state of a mechanical system, i.e. knowing the initial positions and velocities of the objects in the system, uniquely determine the motion of the system.

In what follows, we try to bring those two concepts together. To do so, we must first define the space we live in.

A Space of Time

Further let the vector space be equipped with a positive definite symmetric bilinear form $b: \mathbb{R}^n \times \mathbb{R}^n \to \mathbb{R}$, called a scalar product. The scalar product defines a so-called euclidean structure on the vector space $\mathbb{R}^n$ and enables the definition of the distance between two points $a,b \in \mathbb{A}^n$ in the corresponding affine space: \[d(a,b) := \lVert b-a \rVert := \sqrt{b(b-a,b-a)}.\]An affine space with such a distance function is called an Euclidean space.

To model physical phenomena, one often gives them a home in a Galilean space-time structure. This structure consists of three components.

Time is defined as a linear map $t: \mathbb{R}^4 \to \mathbb{R}$, from the translation space of the affine space to the so-called time-axis. The time interval between two events $a$ and $b$ is $t(b-a)$. If that number is zero, then the two events are said to happen simultaneously. The set of all events simultaneous to an event $a$ forms a three-dimensional affine subspace $S_a \subset \mathbb{A}^4$.

The distance between simultaneous events $a$ and $b$ is defined as the norm of the vector joining the two events: \[d(a,b) = \lVert b-a \rVert = \sqrt{b(b-a, b-a)},\]where $b$ is a scalar product on $\mathbb{R}^3$. Thus the space of simultaneous events is a three-dimensionsal euclidean space.

The Equation of Motion

A motion in an $n$-dimensional space is a differentiable map $x: I \subseteq \mathbb{R} \to \mathbb{R}^n$, also sometimes called a position map. The image of $x$ is called a trajectory or curve in $\mathbb{R}^n$.

In what follows, all functions are continuously differentiable as many times as necessary.

As seen before, according to Newton, all motions of a system are uniquely determined by their initial positions and velocities. In particular, the initial configuration of a system uniquely determines the acceleration, that is, there exists a function $f: \mathbb{R} \times \mathbb{R}^{3N} \times \mathbb{R}^{3N} \to \mathbb{R}^{3N}$ such, that \[\ddot{x}=f(t,x,\dot{x}).\]This second-order differential equation is called Newton's equation of motion. From a mathematical point of view, knowing $f$ means knowing the entire system of objects in motion.

Note that in the previous tutorials the motion of a single object, thus the case $N=1$, was studied.

Since under Galileo's principle of relativity the transformation of the world lines of a given system define new world lines of the same system with new initial conditions, several conditions are imposed on Newton's equation of motion.

It follows that, in an inertial frame of reference, or an inertial coordinate system, the function $f$ does not depend on the time, i.e. Newton's equation of motion can be rewritten as: \[\ddot{x} = f(x, \dot{x}).\]

A second possible Galilean Transformation was the simple translation. Invariance with respect to a translation means that the space must be homogeneous. More precisely, this means that if $x_i = \varphi_i(t)$, $i=1, 2$, ... ,$n$, is the motion of a system satisfying Newton's equation of motion, then so must be $\varphi_i(t)+\tau$, where $\tau \in \mathbb{R}^3$ is an arbitrary translation vector.

The last Galilean transformation to consider is the rotation in three-dimensional space. Invariance with respect to such rotations means that the space is isotropic, which means "uniform in all orientations". The word isotropy is derived from the two Greek words isos (ἴσος), meaning "equal", and tropos (τρόπος), meaning "way", thus, basically speaking, rotational invariance means that "all directions are the same". If $\varphi_i$ is the motion of a system of points satisfying Newton's equation of motion, and $G: \mathbb{R}^3 \to \mathbb{R}^3$ is an orthogonal map, then so must the motion $G \circ \varphi_i$ satisfy Newton's equation of motion.

In a mechanical system consisting of only one point, the acceleration in an inertial coordinate system is zero. 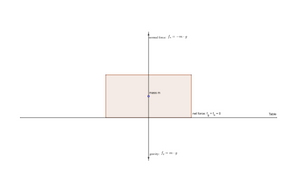